THE BEST SELLING ISLAY SINGLE MALT IN THE WORLD.

The Laphroaig distillery was established in 1815 and has a fascinating 200-year history. This has helped to develop one of the most contentiously popular whiskies in the world. Although Laphroaig is the best-selling Islay single malt in the world, accounting for nearly 50% of the sales from this region, it is actually the one whisky which divides opinion the most amongst people I have introduced it to.

The reason for this split opinion is because the classic Laphroaig whisky has an extremely distinctive smoky and peaty flavour. Some even describe it as having an almost medicinal quality. So for many drinkers, they either love this strong and rich taste, or there are those who will simply look upon you with bewilderment as you enjoy sip after sip.

“THE TWO BRANDS THEN HAD A LONG LEGAL BATTLE”

As for the history of this distillery, it was set up by two brothers (Donald and Alexander Johnston). The former became the sole owner after buying his brother out in 1836. Unfortunately, Donald only lived another 10 years as he died in a dramatic accident when he fell into a vat of boiling alcohol. His only son Dugald Johnston was too young to take over the distillery, so the neighbouring distillery manager took over the helm – this adjacent distillery was none other than the Lagavulin plant. 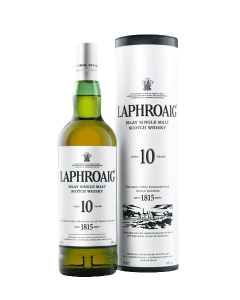 Those who are whisky drinkers will be aware that nowadays Lagavulin is a celebrated Islay single malt in its own right and is one of Laphroaig’s biggest rivals. However back then the distillery was making many blended whiskies. Once the Laphroaig distillery was back under the charge of the rightful heir Dugald Johnston, the two brands then had a long legal battle as Lagavulin had a contract to use the Laphroaig spirit for their blended whiskies. This clearly was a problem for the Laphroaig distillery as it meant they could not sell their stock under the increasingly popular Laphroaig banner.

Thankfully by the early 20th Century, all the issues were resolved. In recent times both distilleries have changed from being family owned to becoming part of multi-national conglomerates. So there is no long standing feud between the companies.

Another noteworthy entry in the Laphroaig history is that the Laphroaig 15-year-old is said to be the favourite whisky of Prince Charles. He gave the brand a Royal Warrant in 1994 – this I believe makes Laphroaig the only whisky distillery with an official Royal seal of approval.

The Laphroaig 10-year-old is a great bottle to start with if you wish to sample the smoky delights of this distillery. A 70cl bottle will cost you between £37-42 depending on the vendor. If you are looking for something a little more special, then try to get your hands on a bottle of the Laphroaig 16-Year-Old Old Malt Cask priced around £150 a bottle. The Laphroaig 16-Year-Old is a limited edition which has a slightly fruitier balance. It is still available from certain online outlets even though only a run of around 1,000 bottles were produced.