STAND OUT IN ANY DRINKS CABINET.

I first became aware of the Spey Tenne single malt whisky on my last trip to Edinburgh and I’m so pleased that I decided to buy a bottle. This whisky is from the Speyside Distillery, owned by Harvey’s of Edinburgh. It is described as having a clean fresh fruit aroma of apples, pears and a trace of overripe bananas laced with milk chocolate and vanilla.

The sweet edge to this whisky comes from the finishing procedure. This means for the final 6 months of the ageing process the whisky is transferred to a Tawny Port Cask. This not only provides a subtle fruity flavour but also gives the whisky a noticeable ruby tint, hence the name which alludes to the staining process. 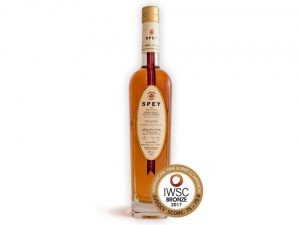 Prior to the final 6 months, the whisky rests in a bourbon cask. Each single malt bottle is aged for a minimum of 8 years delivering a depth of flavour. The whisky initially has a limited release of 18,000 bottles. Which is plenty for you to be able to procure a bottle from your preferred specialist online whisky retailer (prices range between £38-55 at the time writing). Since buying my initial bottle in Edinburgh I have sourced 2 more bottles online which is the best endorsement I can give the Spey Tenne single malt.

In my opinion, this whisky is ideal for those who are new to the premium whisky market. It is also great for those who may have previously sampled a smoky whisky and need to be shown the other end of the scale. Another added bonus is that the aesthetics of the bottle and case make it a great gift for a whisky lover, one that will standout in any drinks cabinet for flavour and appearance.