The Yamazaki 12-year-old single malt has become increasingly popular over the last few years and you may have noticed this bottle adorning many bars across the country. However, this whisky actually has a rich history that you may not expect.

The name of the whisky mimics the name of the distillery where it is created. The Yamazaki distillery is the original Japanese malt whisky producer and was set up in 1924 by Shinjiro Torii. Motivated by traditional Scottish whisky, Torii envisaged a Japanese approach by choosing a terrain and climate completely different to those of Scotland to create a unique whisky. The distillery formulated their first whisky in 1929 called Shirofuda and followed this up with the successful Kukabin in 1937. The distinguished tortoise shaped Kukabin bottle is still available today. 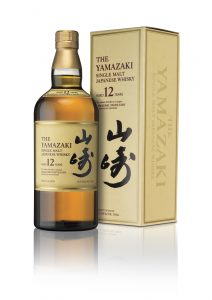 It was in 1984 that the first bottle of the Yamazaki 12-year-old single malt was made by Keizo Saji. He was now a second generation master blender and had inherited the passion for whisky making from his father. This whisky was released to coincide with the peak economic growth in Japan. This was a time when abundance was becoming more mainstream and the character of the whisky aimed to reflect this mood.

Since 1984 a few of the key components in the distillery have been updated. The whisky making process has been improved and now third generation master blender Shingo Torii is at the helm. These modifications have resulted in the Yamazaki distillery winning various accolades and international awards which have, in turn, increased the popularity of their brand and Japanese whisky on the whole.

The current bottle of Yamazaki 12-year-old single malt has a delicate and elegant taste. It has sweet vanilla and fruity tones derived from white oak casks and is accentuated by fine aromas of aged sherry and Japanese oak casks.

Three generations have influenced and prepared this whisky, and fittingly even the prominent calligraphy on the front of the bottle was designed by Keizo Saji. A bottle of this premier single malt will cost you between £90-£100, however for this price tag you are receiving a sample of the great history of Japanese whisky.